They work for you – but how hard?

How hard are our local councillors working for us? Perhaps it’s difficult to tell from the available data, but we can at least see how often they turn up to council meetings. Cambridge City Council publishes a summary of attendance figures for all the meetings that councillors are expected to attend. It’s only a couple of months since the last council elections, so I had a look at the figures for the previous 12 months, from the local and General elections on 6 May 2010 up to this year’s local elections on 5 May.

On average, councillors turned up for 87.9% of the meetings they were expected to attend, just over seven out of every eight. But which parties have the best attendance record? Here’s the graph: 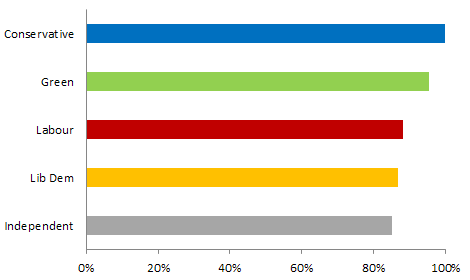 However, this doesn’t give a very full picture. The Conservatives have a seemingly remarkable 100% record, but this simply represents their lone councillor, Chris Howell, attending 7 out of 7 meetings before he resigned from his seat in September. His Labour successor, George Owers, also managed a 100% record with 11 out of 11. The two Green councillors are in second place, with the others trailing somewhat. But it’s probably more useful to look at a distribution, which shows the records of the 29 Lib Dems and 10 Labour councillors more clearly:

Note the break in the horizontal axis of the graph; bottom of the league by a considerable margin was Lib Dem Viki Sanders of Queen Edith’s ward, attending only 9 of 20 meetings (she stood down at the 2011 elections). At the other end of the scale, as well as Cllrs Howell and Owers mentioned above, there is a 100% record for Lib Dems Andy Blackhurst (25 out of 25) and Ian Nimmo-Smith, champion meeting attender with 50 out of 50.

Do councillors turn up more often when they are seeking re-election? I looked at the attendance records of the ten councillors who stood for re-election in 2011, against those who didn’t. And the answer is, well, not so’s you’d notice:

How about if they represent more marginal seats? Here’s a scatter plot showing attendance records plotted against the majority in the councillor’s seat at the 2010 election: 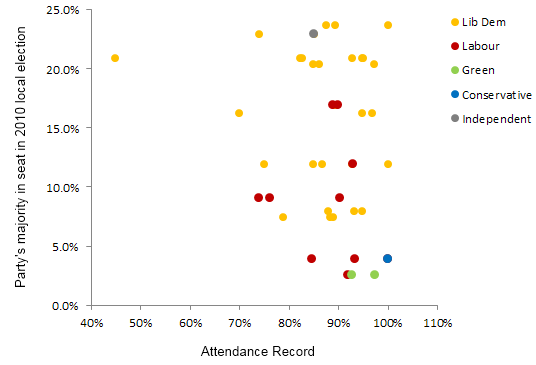 It doesn’t look like councillors in safe seats are very much less likely to turn up. The most noticeable effect is that the Lib Dem tended to have safer seats at the 2010 local elections than Labour. What a difference a year makes.

Of course councillors do other things beside attend meetings, and there may be many reasons for missed meetings that these figures don’t show. But they do give a general idea of how good our local representatives are at turning up to meetings.

3 Responses to They work for you – but how hard?