How much do 20mph limits slow Cambridge traffic?

20mph speed limits have recently been introduced in a number of parts of Cambridge which previously had 30mph limits. The council have been monitoring the changes in traffic speed, and the results have been decidedly mixed. As a number of news reports have highlighted, in many places traffic speed hasn’t changed much, and in some cases speeds have actually increased.

On Monday next week, members of the Cambridge Traffic Management Area Joint Committee, which includes both City and County councillors, will be considering a report on traffic speeds before and after the changes. Here’s the data from the report:

Pity the poor councillors who have to digest that. Yes, all the information is there, but its presentation doesn’t exactly make it easy to take in at a glance. What it needs is a bit of data visualisation. Even a simple bar graph makes it so much easier to understand what’s going on in the data – your visual cortex can compare the length of lines much more quickly than you can read a table of numbers.

So let’s see if we can make the data a bit more vivid. Here are the average traffic speeds before and after the 20mph limit was introduced. The previous speed limit was 30mph:

Certainly nothing like 10mph slower, and in some places speeds have clearly increased. We also have data for the 85th percentile speed. This is the speed that 85% of the traffic was slower than; 15% was faster. This has changed noticeably in one place: 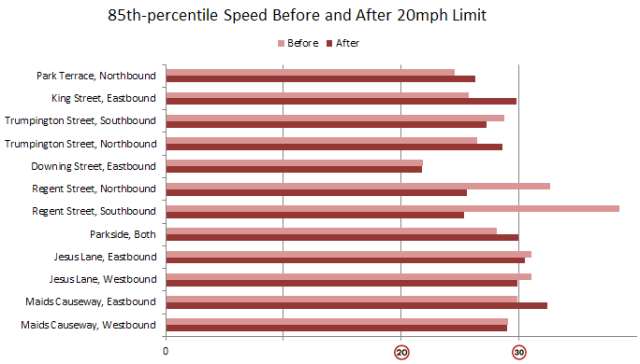 Mostly it’s not very different, but look at those Regent Street changes. Did that jump out of the data table for you? Me neither.

There’s a different set of data for the Wulfstan Way area, where the speed limit change seems to have had no effect at all on traffic speed:

The traffic speeds before the change were monitored in February 2010, and afterwards in September 2010. Of course the speed limit isn’t the only thing that was different between those two periods:

There may also have been particular local factors affecting individual roads. Overall, though, the picture is pretty disappointing for those hoping that the 20mph limits would slow traffic down significantly. In most places, the traffic speeds were little changed, and in some places they increased. The only significant effect of the new speed limits seems to be that the faster drivers in Regent Street have slowed down quite a lot. And of course, it means that most drivers are now breaking the law, whereas previously they weren’t.

5 Responses to How much do 20mph limits slow Cambridge traffic?