Prospects for the County Council elections in Cambridge

In just over four weeks’ time, Cambridgeshire voters will go to the polls to choose their County Councillors for the next four years. Some aspects of this election aren’t particularly exciting – the Conservatives are likely to retain control of the County Council by a comfortable margin – but there is still plenty to interest the follower of Cambridge politics. As well as providing some fascinating contests in individual wards, this year is a dry run for next year’s crucial City Council elections, when the Lib Dems are almost certain to lose control of the City Council, and Labour are very likely to take over. In the wider county, it will also be interesting to see whether UKIP make significant inroads into the Conservative vote.

County Councillors are elected for a four year term, so the seats up for election this year were last contested in 2009. Then, Gordon Brown was in his final year in Downing Street, and Labour’s electoral fortunes in Cambridge were at their very lowest ebb – they won just two seats, Cherry Hinton and Coleridge. The Lib Dems took 11 of the other 12 seats in Cambridge, their best-ever performance, with the Greens winning Abbey and the Conservatives winning nothing at all. Of course, the political situation has changed dramatically since then. At last year’s City Council elections the Lib Dems won just four seats, with Labour taking eight, and one each for the Conservatives and Independents.

It would be reasonable, then, to expect a number of Labour gains this year. But where are these likely to come? This graph shows the Lib Dem margin of victory – or defeat – in last year’s City Council elections in the seats that the Lib Dems are defending this time. 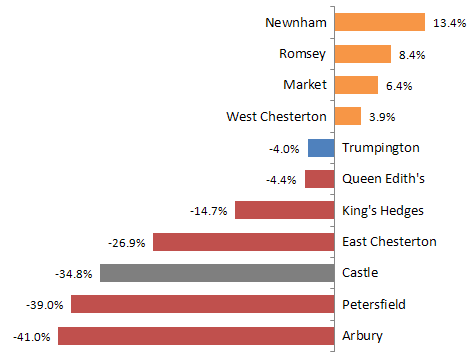 Purely based on last year’s results, then, we might expect the Lib Dems to lose five seats to Labour, one to the Conservatives, and one to Independent John Hipkin. However, the picture will probably be a bit different this year. While local election results do of course depend on local political opinion, they also depend heavily on the campaigning effort that the parties put in. In a low-turnout first-past-the-post election – and in Cambridge local elections, turnouts are typically around the 30% mark – deploying activists effectively can make all the difference. Voters are much more likely to turn out if you have knocked on their door and delivered leaflets to them, and that requires feet on the streets. Campaign strategists have to decide which wards are safe, needing only a minimal effort to hold; which are hopeless, and should have no effort wasted on them; and which are the battleground wards where effort should be concentrated.

Last year saw a mixed campaigning performance from both the main parties. The Lib Dems did well to hold on to Romsey, but managed to lose one of their safest wards, Queen Edith’s, to an inspired Labour campaign. Meanwhile, Labour devoted a lot of effort to piling up big majorities in wards like Arbury, which the Lib Dems were doing little to defend, but much less to West Chesterton, where another 90 votes would have given them the seat and deprived the Lib Dems of control of the council. Furthermore, Labour’s proposals immediately before the elections for tougher regulation of shared housing gave the Lib Dems a vital campaigning weapon.

This year, working up from the bottom of the graph, the Lib Dems seem unlikely to be targeting Arbury or Petersfield. In any case, they have already lost both these seats since 2009 – Arbury at a by-election and Petersfield when their councillor quit the Lib Dem group to sit as an Independent. Castle, however, is likely to be much more closely-fought than last year, as sitting Lib Dem Belinda Brooks-Gordon faces Independent John Hipkin in a rerun of their 2009 contest. Labour look like favourites in Kings Hedges and East Chesterton, but the Lib Dems will be hoping to avenge last year’s defeats in Trumpington and Queen Edith’s, and hang on to the four wards that they did win last year. Of these, Romsey will probably be the most challenging – while Kilian Bourke (Lib Dem leader on the County Council) is hard-working and well-known, he still doesn’t quite have the personal vote that helped Catherine Smart to hold the seat last year. Finally, the seats that the Lib Dems didn’t win in 2009, Coleridge, Cherry Hinton and Abbey, are all likely to go to Labour.

Tactically, the Lib Dems face a bit of a conundrum. Should they concentrate on a smaller number of wards, hoping to be surer of winning at least those, or should they spread their efforts more widely? I think there are a couple of factors that might incline them to the latter approach. Firstly, while it’s almost certain that they will lose control of the City Council in 2014, there’s still an outside chance that they might be able to deny Labour outright control, and a broader campaign this year would help. Secondly, they will be thinking about the 2015 General Election, when Julian Huppert will be looking for votes in all 13 wards of his constituency. It will be vital for them to collect as much voting intention data beforehand as possible.

Nominations for the County Council elections close at noon this Friday (April 5th), and I’ll be looking in more detail at some of the individual contests once the candidates are confirmed.

2 Responses to Prospects for the County Council elections in Cambridge