The 2011 Census gathered a huge amount of information about the population of Cambridgeshire and the rest of the country. Here’s a look at just one aspect of it – what passports people have. This graphic shows the data for each of Cambridgeshire’s districts, with the last two bars giving the overall picture for the county, and for the whole of England: 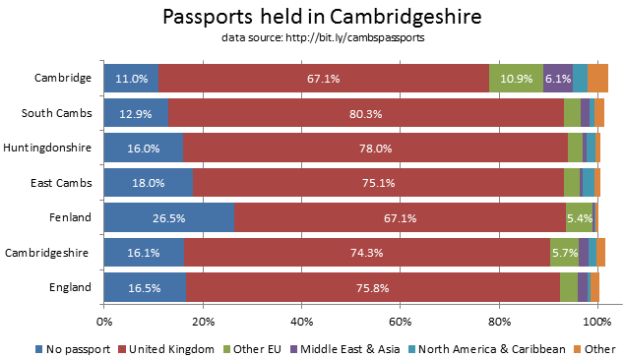 Note that the figures don’t add up to exactly 100% because a few people hold passports from more than one country.

As you might expect, most people in Cambridgeshire hold UK passports, but there are several interesting features in the data. One is that in both Cambridge and Fenland, barely two-thirds of the population have a UK passport, but for quite different reasons. In Fenland, over a quarter of the population don’t have a passport at all, whereas in Cambridge the figure is only 11%, with many more people holding passports from other countries. Overall, nearly a sixth of the county’s population don’t have a passport – a number which I thought was surprisingly high, though it’s almost the same as the number for England as a whole. Some of these people will be children whose parents haven’t yet got round to getting them a passport, but others must be people who have never needed one, or who haven’t renewed their passport after it expired. Perhaps the enormous increases in the cost of a passport in recent years has something to do with this.

As in many other ways, Cambridge is significantly different from the rest of the county, with nearly a quarter of residents holding a non-UK passport – a much higher figure than any other district – South Cambs is in a distant second place with about 8%. No doubt the presence of the University of Cambridge explains a good part of this, as well as Cambridge’s relatively youthful and mobile demographic. It will be interesting to compare the figures from the next census – if there is one – to see how this feature of Cambridge life is developing.

1 Response to Passports in Cambridgeshire