The list of candidates for the 2014 Cambridge City Council elections has now been published, so here’s a look at the prospects for each of the 14 seats being contested. For each seat, I’ve included a graph showing the local election results over the last few years. Firstly, Abbey: 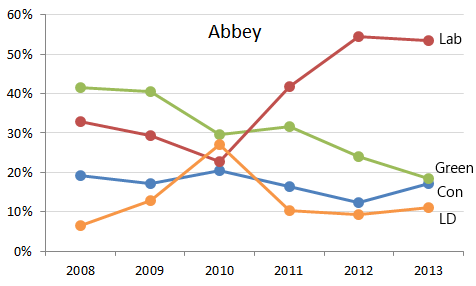 Abbey is a pretty safe Labour seat these days, and Labour incumbent Peter Roberts, who won the seat in a by-election last year, should retain it comfortably. It’ll be interesting to see if newcomer Oscar Gillespie can reverse the decline in the Green vote that’s taken place over recent years. 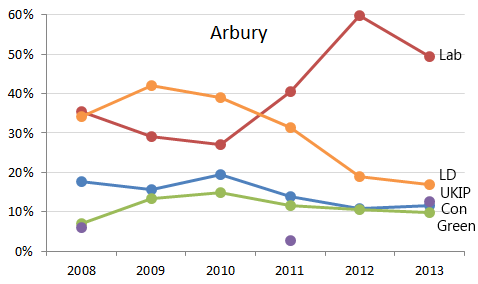 Arbury, where I live, has gone from being a Labour/Lib Dem marginal to another fairly safe Labour seat in the last few years. This year’s defending councillor, Tim Ward, is Arbury’s last remaining Lib Dem, all his former colleagues having been ousted by Labour. However, judging by the amount of paper that’s been coming through my letterbox in the last few weeks, the Lib Dems are putting a lot more effort into fighting Arbury this year. Labour’s candidate Charlotte Perry is a newcomer who hasn’t yet featured much in Labour’s leaflets, though I’m sure we’ll be hearing more about her during the remaining weeks of the campaign. Although a closer result is to be expected this year, given the political climate the Lib Dems will be fighting an uphill battle to retain the seat against Mike Todd-Jones’s renowned Labour canvassing operation.

Castle looks set to provide one of the most intriguing and unpredictable contests this year. The Lib Dem incumbent, Simon Kightley, is standing down after ten years as a Castle councillor, and this year’s Lib Dem candidate is Fergus Blair of Caius College, who last year was Chair of Cambridge Student Liberal Democrats. His main opponent will be former Castle councillor Marie-Louise Holland, who is running as an Independent with the support of her husband, Independent councillor John Hipkin. It may well be that she will have an easier time against a new candidate with a University address on the ballot paper than she would have done against a well-known incumbent. 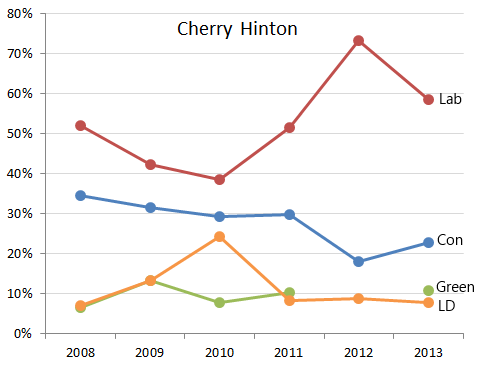 Cherry Hinton is likely to have the dubious distinction of providing the least interesting contest in Cambridge this year. Labour’s Russ McPherson is facing only two opponents, Lib Dem Keith Edkins and Conservative Tim Haire, both of whom have lengthy records of standing as candidates in wards where their parties were not making serious efforts to win. Cherry Hinton is also the only seat in the city where there’s no Green candidate this year. A substantial Labour victory seems a virtual certainty. 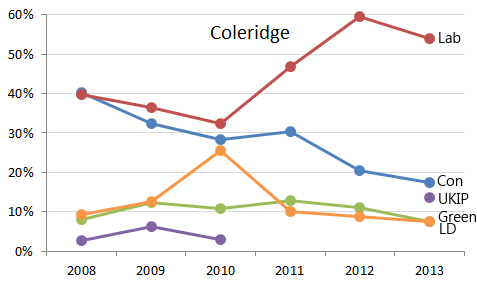 Coleridge should also be another safe seat for Labour, after comfortable wins in the last few years. Labour’s candidate is their group leader Lewis Herbert. The ballot paper will be enlivened by the presence of social media activist Antony Carpen, running as Puffles the Dragon Fairy. I hope he enjoys the campaign. 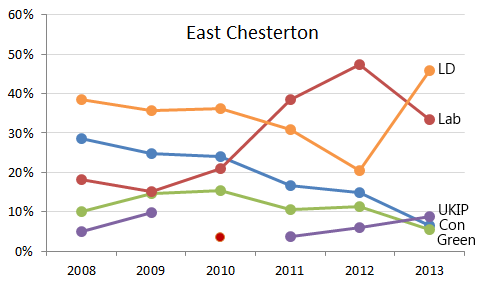 East Chesterton will be closely fought between Labour and the Lib Dems. With incumbent Lib Dem Susannah Kerr standing down, this year’s Lib Dem candidate is Zoe O’Connell, who has previously stood unsuccessfully for the Lib Dems in Petersfield. She is facing Peter Sarris, who contested Newnham unsuccessfully for Labour last year. The Lib Dems will be hoping for a repeat of last year’s emphatic win in East Chesterton, but a closer result seems on the cards this time. East Chesterton also features the sole UKIP candidate in Cambridge this year, Peter Burkinshaw. 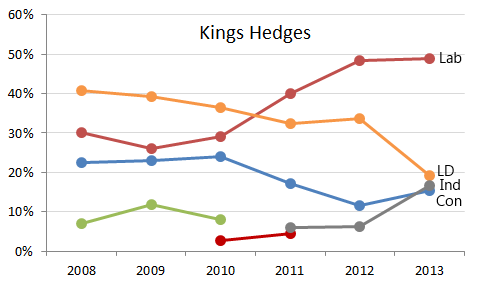 King’s Hedges is another seat where Labour have overtaken the Lib Dems since the General Election. Last year the Lib Dems put relatively little campaigning effort into the seat, and that pattern looks to be repeated this year, with the sitting Lib Dem, Simon Brierley, standing down in favour of Neale Upstone, who came a distant second last year. Labour’s candidate is Martin Smart, last year’s runner-up in Romsey, who can probably look forward to a comfortable win. Independent Iain Tyes is standing for a fourth year, and will be hoping to boost his vote further after more than doubling it last time. 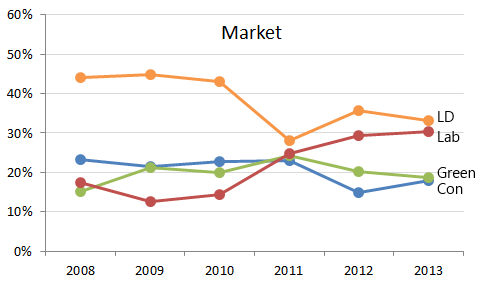 Market has been closely fought since the 2010 General Election, though so far the Lib Dems have managed to maintain their unbroken record of victories since 1989. This year the defending incumbent is the longest-serving member of the City Council, Colin Rosenstiel, who was first elected in 1973. His Labour opponent is Dan Ratcliffe, who came within 41 votes of taking the seat last year. Another close result looks likely.

Update: Since this article was written, Cambridge Liberal Democrats have announced that they have suspended Colin Rosenstiel, who has appeared in court on a charge of assaulting a child. He has pleaded not guilty, but the case will not come to trial until July, several weeks after polling day. According to the Cambridge News report, the Lib Dems will no longer be promoting him as a candidate. This makes a Labour victory in Market ward a great deal more likely. 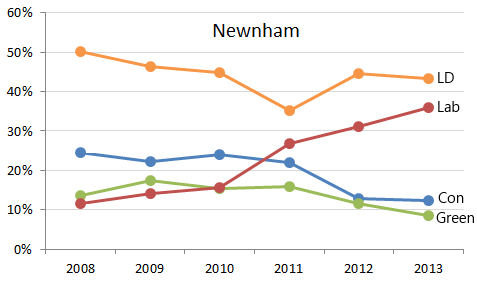 Newnham is one of the Lib Dems’ safest seats in Cambridge, but with the shift in the political landscape since the General Election, they still have a fight on their hands. This year incumbent Rod Cantrill is facing Labour’s Sam Wolfe, a Linguistics PhD student at St John’s College. The Conservatives have also been active in the ward, in support of their candidate Joanna Anscombe-Bell. However, the Lib Dems should hang on this year. 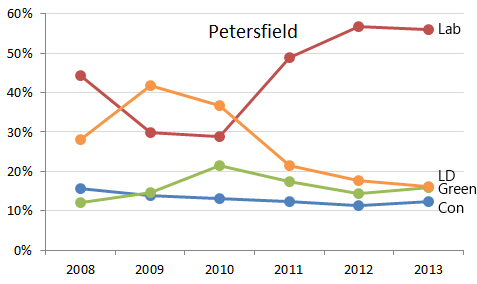 Petersfield is another seat like Arbury and King’s Hedges, where Labour have made a strong comeback against the Liberal Democrats in the years since the General Election. The defending incumbent is Lib Dem Sarah Brown, while a by-election is also being held as Labour councillor Gail Marchant-Daisley has resigned her seat following a bereavement. The second Lib Dem candidate is David Grace, who last year had the misfortune to be the first unsuccessful Lib Dem candidate in West Chesterton since 1989. However, Labour’s Ann Sinnott and Richard Robertson are clear favourites in what is an area of strong Labour support. 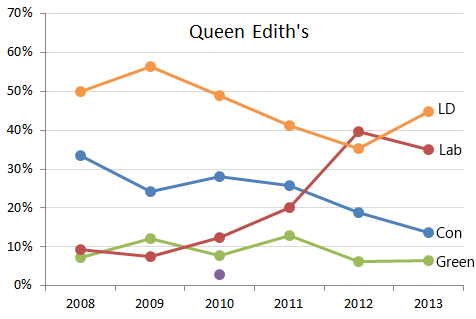 Queen Edith’s had been a safe Lib Dem seat for many years before Labour’s surprise win in 2012, following a strong campaign masterminded by Peter Roberts, now a councillor in Abbey. However, the Lib Dems managed a convincing comeback last year, and should hold on again this time, though with a new candidate, Tim Moore. 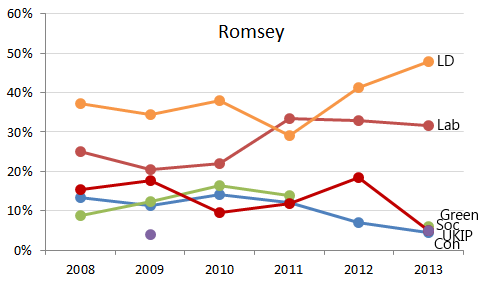 Romsey will as usual be a closely-fought contest between Labour and the Lib Dems, with former firefighter Dave Baigent in the red corner, and current Cambridge mayor Paul Saunders for the yellow team. For the first time in many years there is no Socialist candidate standing against Labour, which may give them a boost. Expect a closer result than last year’s convincing Lib Dem win. 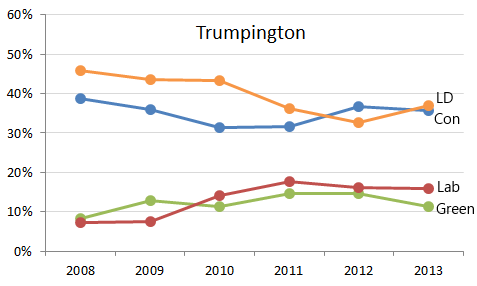 Trumpington is the Conservatives’ best chance of winning a seat in this year’s elections; their sole representative on the City Council, Shapour Meftah, won here in 2012, and last year they missed out by just 28 votes. The sitting Lib Dem, former mayor Sheila Stuart, is standing down, leaving new candidate Nick Avery to face the challenge of Conservative Richard Jeffs. Another close result seems likely. 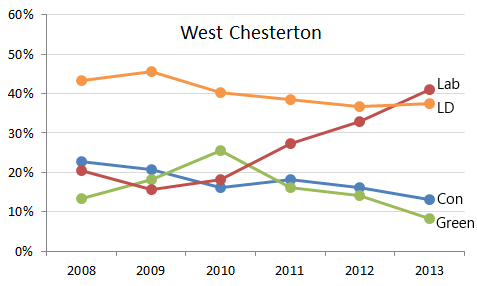 West Chesterton saw the end result of years of slow Lib Dem decline in the ward last year, with their first loss since 1989, and Labour’s first win since 1963. This year, with incumbent councillor Max Boyce standing down, the Lib Dem candidate is newcomer Ysanne Austin, who will face a strong challenge from Labour’s Mike Sargeant. Unless the Lib Dems can strengthen their supporter network in the ward, another Labour win seems quite possible.

Party activists will be at their busiest over the three-and-a-bit weeks that remain until polling day on May 22nd. Despite the European elections being held on the same day, turnout is only likely to be around 40%. The parties know that motivating their supporters to turn out will make all the difference in seats that are likely to be decided by a handful of votes.

3 Responses to Candidates for the 2014 Cambridge City Council elections