As Cambridge voters go to the polls on Thursday, they will be handed two ballot papers to fill in. As well as the next MP for Cambridge, they will also be asked to choose a councillor to represent them on Cambridge City Council. The City Council is elected by thirds, so 14 of the 42 seats are up this year. Here is a look at each of them.

For each ward, I’ve made a graph showing the local election results over the last decade, to give a bit of context. One particular point to note is that, in several wards, the 2010 result was noticeably different from earlier years – due to the General Election being held on the same day, more than doubling the typical Cambridge local election turnout of around 30%. It’s also noticeable that in local elections after 2010, the Lib Dem vote fell sharply in many wards as they suffered the electoral disadvantage of being in government at Westminster, while Labour’s vote rose as they sank gratefully into the warm bath of opposition.

On to the wards. First, Abbey:

Abbey’s graph illustrates the dramatic effect that a simultaneous General Election can have on local election results. After propping up the results table for several years, the Lib Dems shot up to second place in 2010, coming within 94 votes of taking the seat for the first time. However, the change of national government greatly boosted Labour’s vote after 2010, and Abbey is now one of their safest seats, with the Greens still in second place, but no longer seriously challenging them. Labour’s Caroline Hart, who has been an Abbey councillor since 2002, should be re-elected comfortably here. 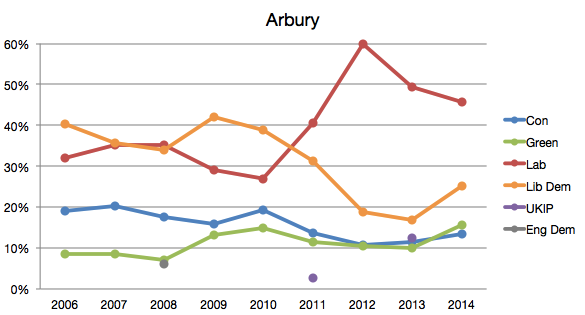 After many years as a Lib Dem/Labour marginal, Arbury is another seat where Labour has racked up substantial majorities since 2010. This year former Arbury Lib Dem councillor Tim Ward, who lost his seat in last year’s election, is facing Labour’s Carina O’Reilly, Labour’s deputy leader on the City Council, and Executive Councillor for City Centre and Public Places. Carina has faced some criticism in the southern end of the ward for her decision to cut back plane trees at Alexandra Gardens, despite previously campaigning to save them. However, she should still be re-elected fairly comfortably, though probably with a lower vote share than last year.

Once a safe Lib Dem seat, Castle has provided a good deal of psephological excitement in recent years thanks to the Castle Independents, husband-and-wife team John Hipkin and Marie-Louise Holland. Last year Marie-Louise won the seat by just 20 votes, the narrowness of her majority being a surprise to everyone concerned. However, with no Independent candidate this year, Lib Dem Valerie Holt is favourite to take the seat, though the large student electorate in the ward will add an element of uncertainty. 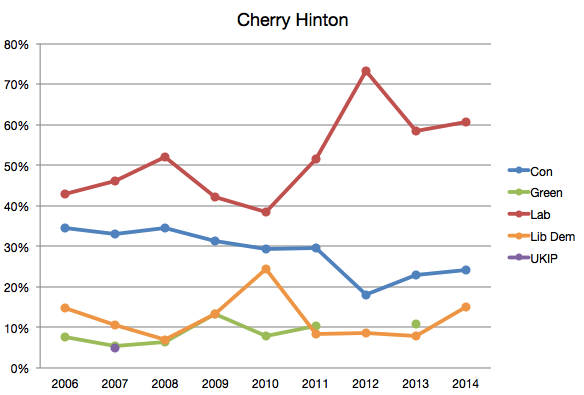 Cherry Hinton is one of Labour’s safest seats in Cambridge – notice that this graph is taller than the others in order to accommodate Rob Dryden’s mountainous majority in 2012, when he took 73% of the vote. This year Labour’s Mark Ashton is seeking re-election, and it will be the Cambridge electoral shock of the century if he doesn’t get back in. Bonus points for persistence must go to Conservative Timothy Haire, who having been rebuffed nine times by Cambridge voters, is coming back in Cherry Hinton this year for a tenth attempt.

It’s a curious fact of Cambridge politics that Labour tend to do better in wards earlier in the alphabet, and Coleridge is another example of this. After some years when the Conservatives were in contention here, thanks to an active local team, Labour are now firmly in control, and their candidate Jeremy Benstead, who has already served 23 years on the City Council, seems virtually certain to be re-elected. Sadly there is no dragon fairy candidate on the ballot paper this year; Puffles has retired from electoral politics (at least for the moment) after racking up a creditable 89 votes last year. 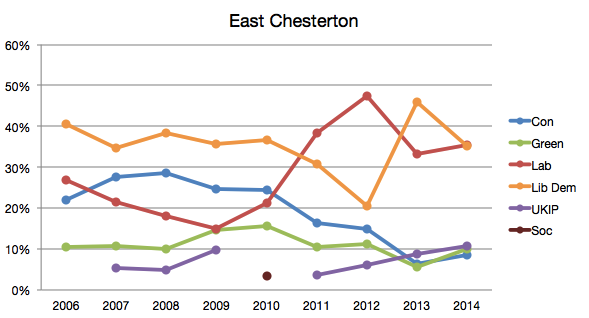 East Chesterton was a knife-edge result last year, with Labour’s Peter Sarris defeating Lib Dem Zoe O’Connell by just ten votes. This year the defending candidate is the current Mayor of Cambridge, Labour’s Gerri Bird, who faces Lib Dem campaigner Shahida Rahman. Given her strong local profile and campaigning record, I think Gerri has to be favourite to hang on. 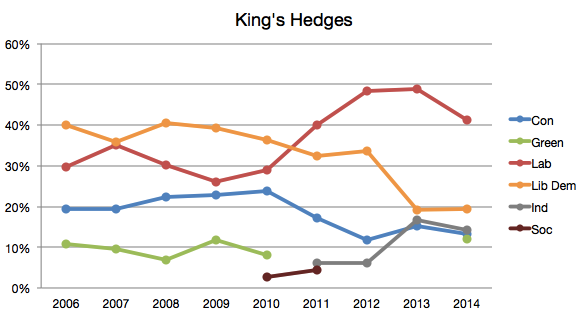 Although at one time they won King’s Hedges with quite respectable majorities, the Lib Dems have largely given up here in recent years, with the ward reverting to its natural condition as a safe Labour seat. However, with the General Election bringing campaigning to all parts of the city, Labour’s majority (in vote share terms at least) will probably fall this time. Their candidate is incumbent Kevin Price, who is facing Lib Dem newcomer Hugh Newsam. Independent candidate Ian Tyes is standing for the fifth time, but with the deluge of campaigning from the main parties, this is unlikely to be a good year for him. 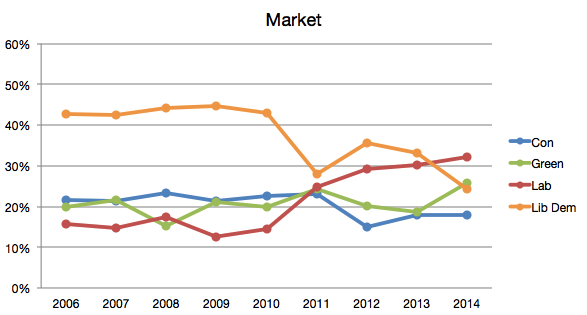 Market is now one of the least predictable wards  in Cambridge. There were special circumstances last year as the Lib Dems suspended their candidate following an assault charge, though Labour might well have won in any case. The Greens came second with a creditable 26% of the vote, despite doing very little campaigning – the total expenditure on their election expenses return was zero. This year they are putting in a good deal more effort, but other parties are also running strong campaigns. With a large student vote that normally pays little attention to local elections, the result is difficult to predict (though I will have a go in a later post).

A once-safe Lib Dem ward, Newnham has been a much more closely-fought contest since the last General Election. In 2014, Lib Dem Rod Cantrill was re-elected by a margin of just 69 votes. This year the incumbent, Julie Smith, is standing down following her elevation to the House of Lords, and the Lib Dem candidate is newcomer Markus Gehring. His Labour opponent is another first-time candidate, law lecturer Ewan McGaughey. With the large student vote in Newnham ward, it’s difficult to predict the result this year.

Petersfield is another once-marginal ward where Labour have gained the upper hand since the 2010 General Election, though Lib Dem Sarah Brown did put a dent in their majority last year. This time veteran Labour councillor Kevin Blencowe is seeking a seventh term in office, and seems very likely to win it.

Queen Edith’s is unusual in Cambridge in that it’s the only one of the fourteen City Council wards that falls outside the Cambridge Parliamentary constituency, being instead part of the South Cambridgeshire seat. As a result it’s experiencing a much less intense election campaign than the rest of the city, as Conservative Heidi Allen is virtually certain to be elected as MP. Incumbent Lib Dem George Pippas is favourite to be re-elected for the council seat. Local resident Chris Rand has been doing a great job of covering the election in Queen Edith’s on his website, so have a look there for more details.

After proving fairly resilient in Romsey, the Lib Dems were defeated last year (contrary to my confident prediction) by Labour’s Dave Baigent. The absence of a Socialist candidate for the first time in many years no doubt helped Labour, as it should this year too. The incumbent Labour councillor Zoe Moghadas is standing down, and her colleague Anna Smith seems likely to succeed her as councillor.

Trumpington is that rare thing in Cambridge, a ward where the Conservatives are in serious contention. Indeed for the last few local elections they have focused most of their efforts in the city on Trumpington, winning it in 2012 and missing out by just 28 votes in 2013. This year of course Conservative campaigning will be spread more widely across the city, but their candidate Daniel John should still be in contention here. With incumbent councillor Andy Blackhurst standing down, the Lib Dem candidate is Zoe O’Connell, who was defeated last year in East Chesterton. While fighting Trumpington on the City Council, Zoe is simultaneously standing for Parliament in Maldon, Essex – though as this is a rock-solid Conservative seat, it’s unlikely she’ll be faced by the dilemma of winning both.

Finally, West Chesterton should provide another tight Lib Dem/Labour contest this year. Once a safe Lib Dem seat, the local Labour team have been gradually increasing their share of the vote in recent years, and took the seat in 2013 for the first time since the 1960s. Last year the Lib Dems fought back, winning a narrow 19-vote majority. This year incumbent Lib Dem Damien Tunnacliffe faces Labour’s Mike Sargeant.

Full details of all the nominated candidates are on the City Council’s website. Thanks once more to Colin Rosenstiel for his invaluable collection of Cambridge local election results.