The 2015 Cambridge election results in detail

Now that the dust has settled after Thursday’s extraordinary elections, here’s a detailed look at the results in Cambridge. The Parliamentary race was a desperately close-run thing, with Daniel Zeichner defeating Julian Huppert by just 599 votes, or 1.1% of the total:

For both Labour and Conservatives, the Cambridge election brought a mixture of triumph and disaster. Labour succeeded in sending Daniel Zeichner to Westminster, only to find that he would be sitting on the opposition benches when he got there. The Conservatives triumphed nationally despite all the opinion polls to the contrary, but in Cambridge recorded their worst-ever share of the vote. For the Lib Dems, however, the election brought a mixture of disaster and more disaster – as well as narrowly losing the Cambridge seat in a desperately closely-fought campaign, they suffered a truly catastrophic electoral meltdown nationally.

The other three candidates performed more or less as expected – Rupert Read fractionally increased the Green vote share, from 7.6% to 7.9%, but never seriously threatened to make much headway. He will have been pleased, however, to help elect a Green councillor in Market ward. Patrick O’Flynn’s perfunctory campaign for UKIP was just enough to save his deposit. Keith Garrett garnered just a handful of votes, a pretty typical result for a non-party candidate in Cambridge.

As well as the Parliamentary election, 14 seats on Cambridge City Council were up for election on Thursday. Here’s a look at each one: 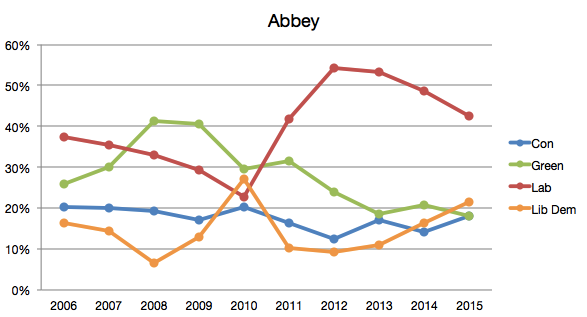 Labour’s Caroline Hart held Abbey by a comfortable margin, though her vote share was down a bit, while the Lib Dems managed to finish second for the first time since the last General Election, due to a more visible campaign in a ward where they usually do little. The Greens, who won Abbey only five years ago, finished only five votes above the last-placed Conservatives. 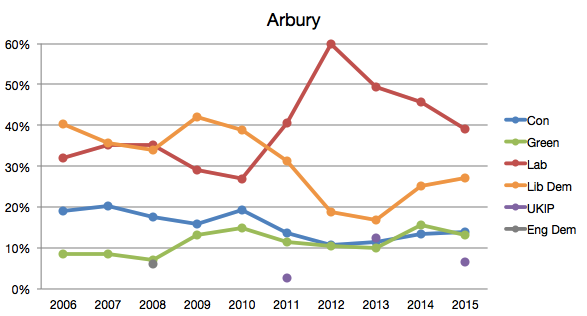 The results showed a similar pattern in Arbury, a slightly less safe ward for Labour, where Carina O’Reilly won with a reduced but still comfortable majority over Lib Dem Tim Ward. UKIP appeared on the ballot paper for the first time in a few years, but made little impact. 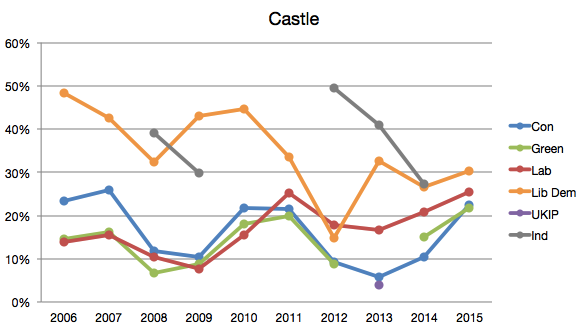 With no Independent candidate in Castle this year, all parties saw their vote share rise. Conservative Simon Mitton recorded the largest increase, but still only managed to come third. Lib Dem Valerie Holt held off the challenge of Labour’s Patrick Shiel to take the seat.

Cherry Hinton followed the standard pattern of safe Labour wards, with Labour incumbent Mark Ashton winning comfortably though with a reduced majority over an increased Lib Dem vote. There was more choice on the ballot paper for Cherry Hinton voters this year, with the reappearance of Green and UKIP candidates, though they made little impact.

Another ward following much the same pattern was Coleridge, which re-elected Labour veteran Jeremy Benstead. There was a considerable boost for the Lib Dems here, echoing the pattern during the 2010 General Election. 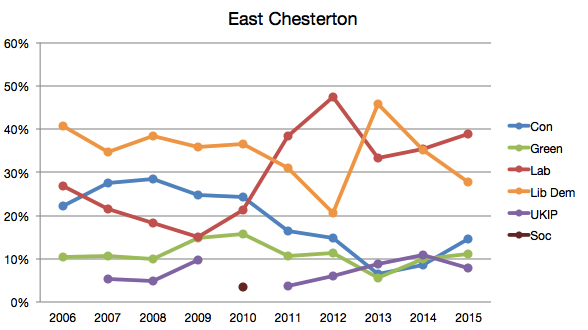 East Chesterton has been closely contested in recent years, with Lib Dem Ian Manning overturning a large Labour majority to score an emphatic win in 2013, but Labour’s Peter Sarris winning the ward back for Labour last year by just ten votes. This time the incumbent Gerri Bird, who will soon complete her year as Mayor of Cambridge, won fairly comfortably for Labour.

King’s Hedges had the widest choice of candidates for the voters, with six candidates on the ballot paper. Incumbent Labour candidate Kevin Price won comfortably, with only a slightly reduced vote share. Independent Ian Tyes, standing for the fifth time, suffered a collapse in his share of the vote in the face of the more than usually vigorous party campaigns brought by the General Election.

Market provided by far the closest result. After a recount, Green candidate Oscar Gillespie was elected with 1,147 votes, just seven ahead of Labour’s Danielle Greene, who in turn was just six votes ahead of Lib Dem Dom Weldon. This is the closest three-way result in Cambridge local election history, as well as the lowest winning share of the vote – just 27.7%. Oscar Gillespie becomes the first Green councillor on Cambridge City Council since Adam Pogonowski defected to Labour in 2012.

Newnham was expected to be close, particularly given the larger number of students voting compared to “normal” local elections. In the event the Lib Dems held on with a reduced share of the vote, but a larger majority. Their new councillor is Markus Gehring. The Green candidate Kate Honey managed the largest increase in vote share. 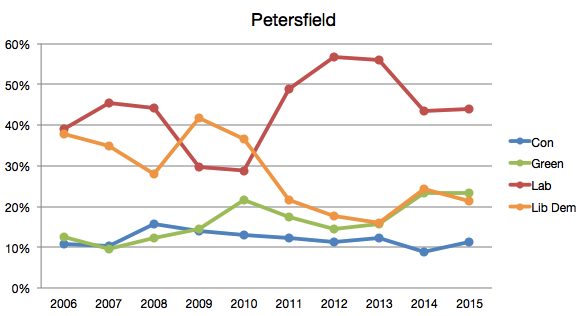 Petersfield was a comfortable win for Labour’s Kevin Blencowe. Although targeted by the Greens, they only just managed a distant second place, just ahead of the Lib Dems.

Being the one ward outside the Cambridge constituency, Queen Edith’s saw a less vigorous campaign than the rest of the city. The Lib Dems held on relatively comfortably, with their candidate George Pippas re-elected by 400 votes, by far the largest Lib Dem majority of this year’s Cambridge elections. Conservative Andy Bower did well to increase his vote to within a whisker of Labour’s.

The reinvigorated Labour Romsey team managed its second victory in a row, with Anna Smith winning the seat ahead of Lib Dem Donald Adey. Remarkably you have to go back to 1997 to find the last time Labour won twice in a row in Romsey, in what was once a rock-solid Labour seat. The Green candidate Jane Carpenter also did well, increasing the Green vote share to 22%.

Labour did better than usual in Trumpington, due to running a full-on General Election campaign rather than their usual fairly cursory local election effort in this seat, though still finished third. Lib Dem Zoe O’Connell, defeated in East Chesterton last year by just ten votes, took the seat ahead of experienced Conservative campaigner Daniel John. 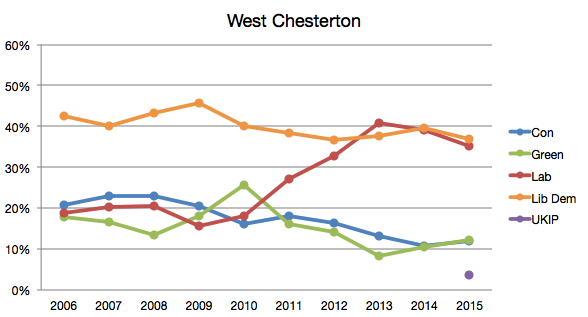 West Chesterton was once again very close between Labour and the Lib Dems, with Labour’s Mike Sargeant once again filling the runner-up slot. Damien Tunnacliffe was elected for the Lib Dems. 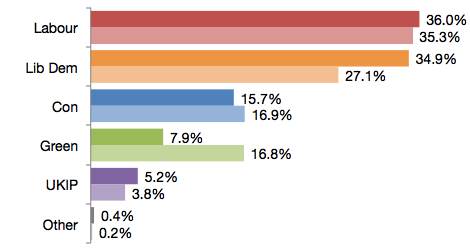 This suggests that a lot of people who voted Green in the local elections supported Julian Huppert in the General Election. Labour and the Conservatives had reasonably similar vote shares in both.

Thanks as ever to Colin Rosenstiel for election data.

3 Responses to The 2015 Cambridge election results in detail